skip to main | skip to sidebar

If you remember that  nickname from 40 years ago. This one's a '79. Was in one piece but a wrench fell on it an it came apart. The only thing I know is the POS was made in Illinois and the 1hp engine was made in California. That means when I get it running it will only go left. 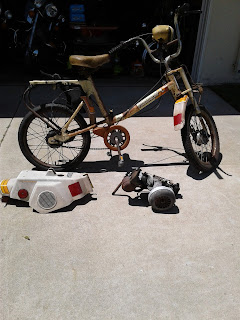 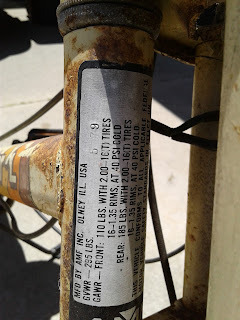 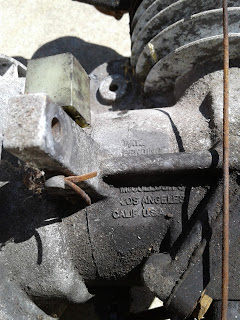 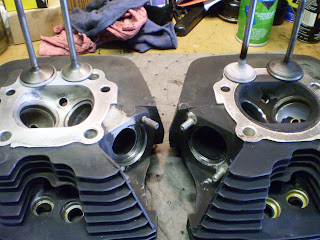 Yes, I’ve been neglecting the blogs, Faceyoubook, TV; don’t even know what’s happing on SOA. Is it still on? Neglecting damn near everything but work. That shit can really get in the way of life. But I’ve grown to like sleeping inside and eating regularly so I’ll have to continue paying taxes. I think the only good thing about my day job is that it supports my real job of working on my bikes.


The ’02 Ultra is back in one piece with a few changes. A nice fresh 95-inch, S&S 510G gear drive cams, Fueling cam plate, oil pump & lifters, S&S intake and Hooker exhaust. The front brake system was rebuilt with Brembo’s from a 2010. The rear brake and forks are next. When you put a whole lot of go into one of these things, you’ve got to put in a whole lot of whoa also. 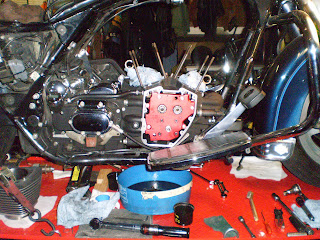 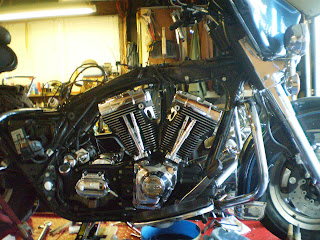 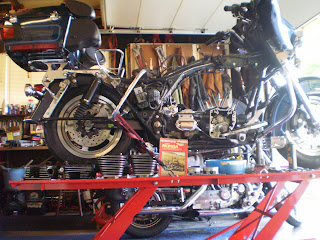 I’m not sure what happened. I was following the instructions to check the sparkplug gap. This sure seemed like a lot of BS just to checks plug gaps, but the Company service manual said so. It must be the truth.


It was about the time I noticed the cat sitting in the doorway laughing at me, that I also noticed the instructions were for checking piston gaps, not plug gaps. Stupid me, guess the cat got me. She changed the page while I wasn’t looking. That’s OK. When she gets hungry I’ll give her the instructions for the coffee pot instead of the can opener. 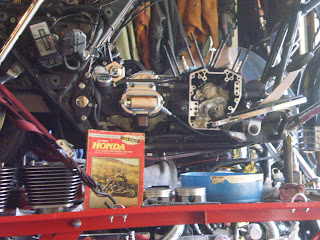 I’m either going blind or getting one of those old-fart things in the brain. I just had the primary open a few weeks ago and didn’t see the screwed up adjuster shoe. It’s not a new crack. Looking at it with a loupe, the edges are smooth and it’s discolored by oil. So it’s been vibrating against itself for a while. I only found it because my cheap ass put the cover on with the old gasket and it leaked. So I had to buy a new gasket. 21 dollars down the drain.


It’s one of those things that could last ten years or ten minutes. Hard to say. What would happen if it broke at 90 MPH? Would the chain just slap the crap out of the housing? Would a piece jamb and destroy the whole thing, lock the wheel and leave me for buzzard food in the middle of the Desert somewhere? Guess I’ll have to bite the bullet and spend the 8 bucks for a new one. Just seems like the responsible thing to do. 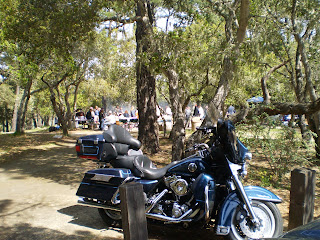 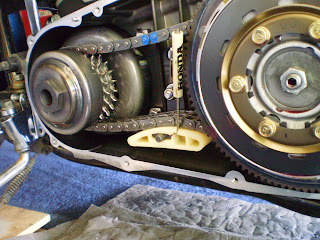 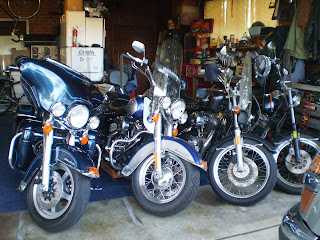 This is for IHG just because she asked. That and I can’t say no to a pretty girl.


It’s back in one piece. There are some changes from the previous picture. I’ll let you guess what they are. I got to meet the last owner. He purchased it in Santa Barbara, CA in Oct. of 2001. That’s kool because now I’ve got a history of all the modifications you can’t see. And this thing has a bunch of them. All performance or comfort changes. No extra do-dads that serve no purpose. While still keeping a mainly stock appearance.

The way it is here is the way I’ll probably keep it. The only things I want to add is the full saddlebag guards and a luggage rack on the trunk. And if anybody has any they ain’t using….. 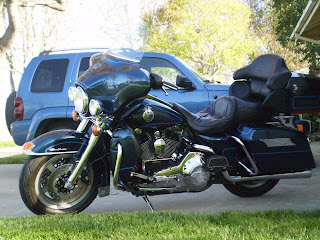 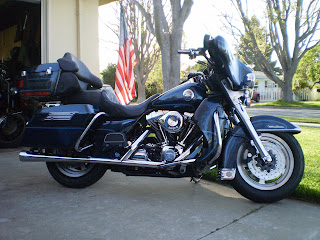 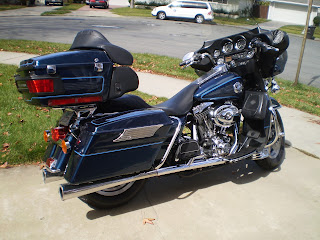 So, ya’ find a deal on a used Dresser. One owner and well maintained. It runs perfectly fine just the way it is. So friggin what. It’s not the way ‘I’ want it.


So what to do with it? Take it home. Snap a picture so you remember what it looked like before you screw it up, then push it into the garage. After several hours of a caffeine induced coma, (you can substitute you recreational substance of choice), you wind up with a pile up junk. Maybe it’ll run again maybe it won’t. Boys will be boys. 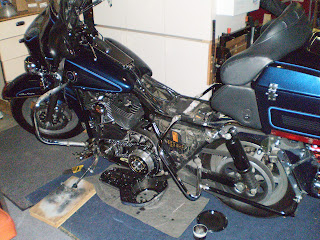 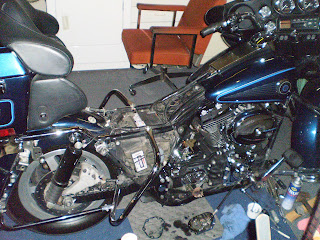 Road Tunes On The Cheap

Shit happens when you get old. Like me wanting to put some tunes on my Heritage. I figured it might be nice to have something to listen to other than my co-pilot beating on my back a saying “I gotta’ piss”.

Now there are a lot of options out there to make this happen most of them just aren’t my options. The faring option? No way. To much smokes and coffee money. Speakers on the handlebars? Maybe. But you still gotta’ do something with the amp. Generally they get stashed in a windshield pouch or saddlebag. Both of which are not easily accessibly and lend to exposed wires. Plus I don’t really care for speakers on the bars. They stick out to far and screw up the flow lines.

So you’ve got this empty space between the bars and windshield that looked like something would fit there. Now to find it. There’s a lot of stuff out there on the www. Some cheap some way on the overkill side. I just wanted something to listen to Dean Martin on, not blast the paint off my tank with hippie music. I finally settled on a company out of Brooklyn, NY named Gooddeals18. They sell Shark Audio, which is a brand I’ve never heard of.

Judging by their pricing I guessed it would be poorly assembled crap from China. I was correct. I also knew I was going to disassemble every part. The speaker grills were painted to cover the ‘shark’ logo. Tabs were shaved down on the inside and fiber washers were added between the speaker and grill mounts. Never mistake a speaker with a mechanical vibration with a blown speaker. Two different things. The amp was striped and repainted. Again, to cover up the logo. Sorry folks over at Shark, but I don’t do advertising, just sarcasm.

The mount is 1/16 steel plate, 1” bar clamps, some welding, drilling and a project box mounted underneath to hide the wires. The amp plays my operas via a AUX input, USB or SD. Plus it has a FM tuner. The specs say its 250W. I doubt it, but don’t really care. Going down the road fast, of course, I can hear the tunes just fine at about 80% volume. The speakers shocked the shit out of me. The sound is excellent. The buttons on the amp are a little small, but at 3.25 inches across the front what do you expect. It doesn’t take long for your fingers to memorize what’s what. The only thing I really need is the volume control while moving. When I find a Glide that no longer needs its handlebar volume control and housing I’ll solder it into the amp.

All things considered, except for me being out about a hundred bucks, I think it’ll do what I want, for now. Other modifications are pending. 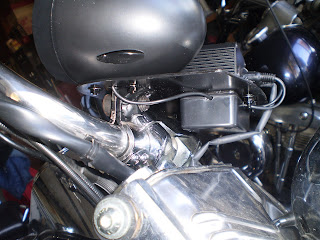 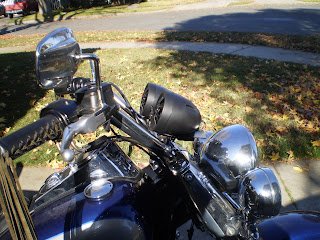 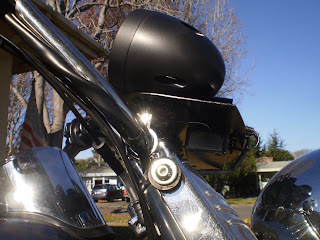 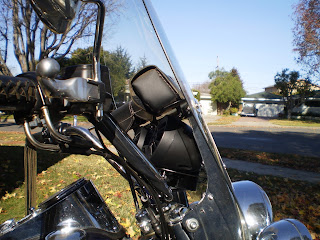 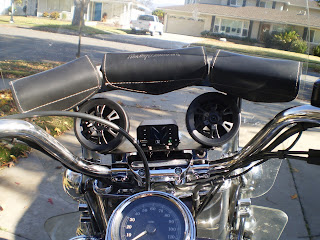 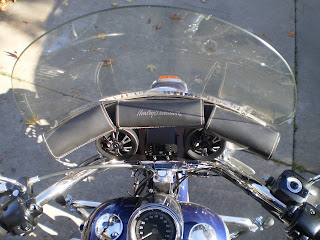 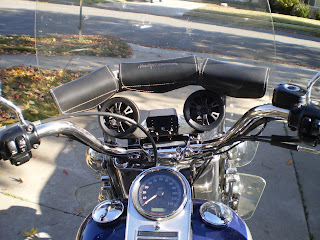 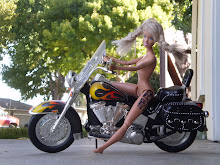 Thing That Go Bump In The Night 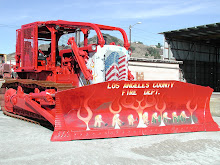 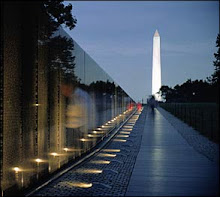 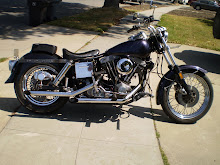 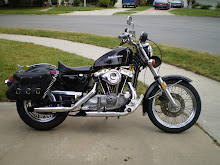 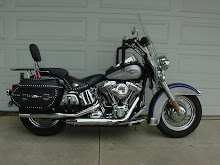